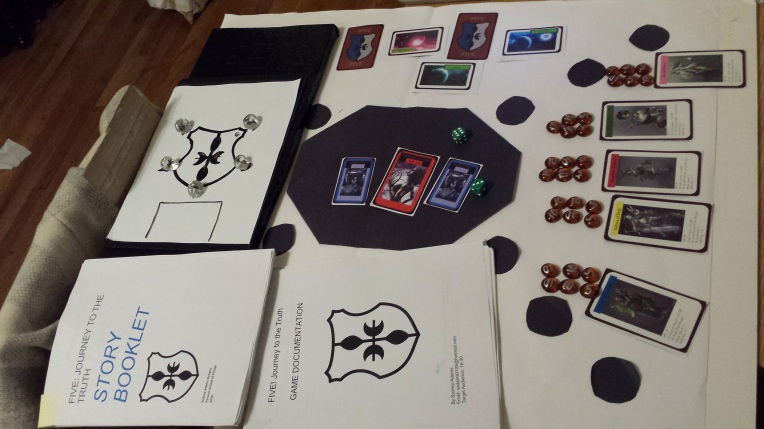 The game uses two 6-sided dice, but can use one.
The Character Cards give the Players abilities.
The Terra Cards help choose the planet of the adventure.
The Crystal Runes represent each character.
The Shield represents the order in which each Player will fight in the Battling System.
The Brown gem tokens represent the number of Health Points each character and villain character possesses.
Black Encounter Disks represent the possibility of encountering enemies in the dungeon.

The game begins with a single dice roll. Highest roll gets to choose their character first. They will then select a face down Terra Card and roll the dice again. The number and the planet on the Terra Card will correspond to the adventure in the Story Booklet that the team will embark on. Then in order of highest roll to lowest, everyone else gets to choose their character. If a team is experienced, they may skip this part and select the character they are best at. 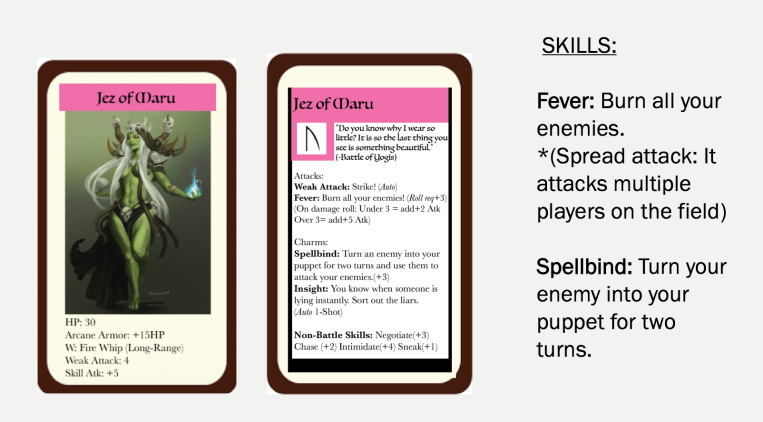 The person who is a resident of the planet and thus a local is Team Leader.

(On Maru? Jez of Maru is Team Leader.)

When navigating the local area, the team will be prompted to choose between two options per interaction. Either the leader will be individually asked, or the team will have to decide. When they decide, they skip ahead in the Story Booklet to their choice and continue the interaction until their next choice. 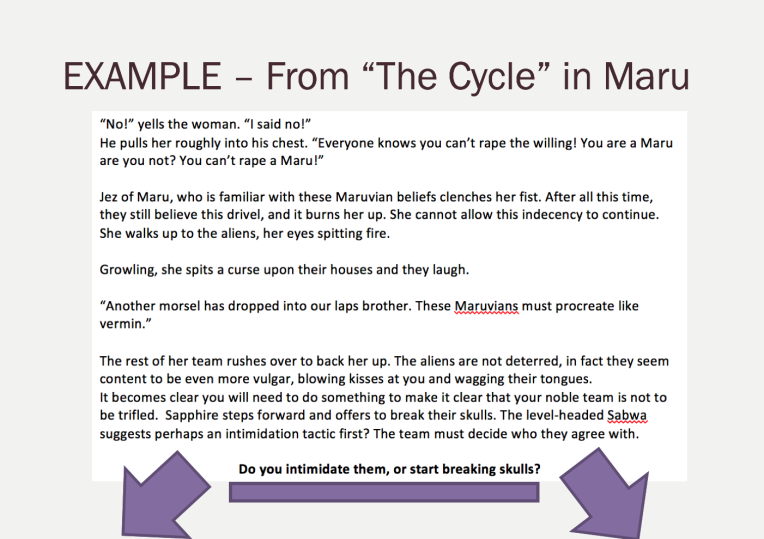 Some choices lead to conflict which will activate the Battling System (see below).

If the Battling System is activated in reconnaissance, it will hinge on a success or failure system, and players are welcome to retry the encounter at their own risk.

The Villain will always strike first with or without minions. The team will take damage, then go as a whole.  Weak attacks of through automatically, all other attacks require a +3 roll to go through.

A successful roll adds the roll to the attack of the Character and deals damage to the minion of the Player’s choice. The Boss cannot be directly attacked by anyone by Sabwa of Holt who possesses the ability Iron Skin. When all minions are defeated, all Players may attack the Boss.

If fighting a boss, the Players must take down the minions by the fourth turn or the Boss goes into a secondary power state. The Boss also goes into secondary state if health drops below ½.

Problems: Jez keeps dying too easily. The strategy has not yet been implemented in tactics unique to each character. The reconnaissance stage is not interactive aside from two choice decisions.

Problems: No way to refill health in dungeons unless you’re Welf who has Drain.

–           Example: Welf has Long-range Throwing Daggers, which means she is more useful to attack a fleeing opponent than Sabwa who can only yield her Long Sword Close Range, (though she’s got great reach).

Shuffle the Terra Cards and place them face down, and spread out the Character Cards face up.

TERRA CARDS NOTE: Terra Cards effect the player’s environment. You can only fight in one environment at a time, and each environment will have its own set of struggles, boss, and storyline.

Each character has a specific set of skills that are activated through dice rolls. The game is divided into three parts: Reconnaissance, Dungeon, and the Boss Battle.

STEP THREE: How to Fight:

Weak Attack: An attack that needs no roll.

Each player card will have an amount of health points, attack points, and a circle indicating which planet they are from. Their planet of origin will always be where they are strongest. In order to attack, the players will have to roll their dice and add the score to their attack points.

Non-battle SKILLS: Skills that can only be used in the prologue.

WEAK ATTACK: Requires no roll, is an auto attack.

TO SKILL ATTACK: Players must roll a minimum 3, in order to have a successful hit on the enemy targets, and then roll again to determine the attack power. Attack power is calculated with a card attack plus the roll. If the roll is unsuccessful, the player must wait a full turn for their next opportunity, IF they survive the enemy’s attack.

If a player’s health drops below zero, they fall into a coma where they can do one of two moves. They cannot discuss their decision with their teammate.

Dead Man’s Grip: After 3 turns. allows the character to use the the last of their strength to deal a blow to the enemy that is double their attack points, and then become inactive for the rest of the game.

Resurrection: After 6 turns. She’s alive! Return from the dead with half your health points and all your attack points.

The players must find the boss, defeat their minions, and defeat their boss. The game end when either the boss is dead, or all players are rendered in a coma or inactive.

Parsons School of Design: Design and Technology,  Best in Show (2016)

I am currently embarking on an 8-week journey to create a project that speaks to both my experience, and my design sensibility. With this is in mind I was inspired by my favorite pass-time,

Specifically, I became super interested in the newest hero, “Ironheart,” who in the Marvel Invincible Iron Man latest installment is supposed to replace Tony Stark with Riri Williams, an African-American, female, super genius. Here are some of the first drawings of her.

These are pretty cool, until you take into account that she’s supposed to be a FIFTEEN YEAR OLD GIRL. These pictures are not appropriate for a character that is a child. They are sexy, and many fans including myself had a problem with it. While the sexualization of female heroes has always been a problem in comics in general, the real issue I have is that this echoes a deep inability for the general public to understand Black women. There appears to be a disconnect with what a Black woman really is. Is she an overweight sassy encouragement with endless advice that saves all the dumb young people around her? Is she a sexy siren that only a true man can satisfy, furthering the idea that a man can prove his worth by satisfying a SISTA? Is she a loud, angry, nag that emasculates the men around her?

It’s hard to decide with the media, and in instances that are intended to dispel these myths, i.e. the super intelligent 15 year old Riri Williams, you still see some of the stereotypes bleed through.

However, because Riri is a CHILD, it is lucky that the populace as a while rejected this, and the newer images are more appropriate.

However, we then see that her hair texture has been loosened and her skin has been lightened, which is a a shame considering her character’s look is based off of the Disney channel actress, Skai Jackson. 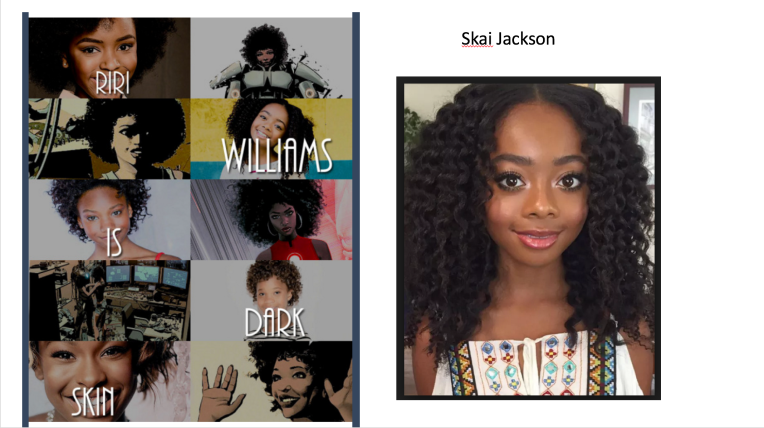 Even before the she was redrawn, when people discussed possibilities for her casting, these were some of the prominent fantasy picks. 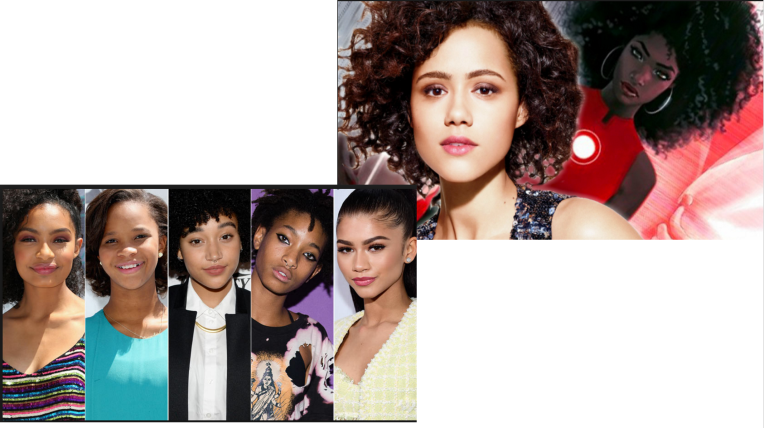 Oy vey. Why is it so impossible to have a dark skinned black girl who looks like a GIRL, be a super genius? Why can these things not coexist? Why does something have to give in order to make the idea somehow palatable.

It is these things that bleed over that makes me realize that despite the strides we as a people have made to overcome stereotypes, we still have a far way to go, which is why I want to create my game.

Originally I had planned to make a digital game, but I have a time restraint of 8 weeks to make everything happen.  So the first stage of my work is research, so that I can better understand how to convey my ideas.

SO, HERE IS A LITTLE HISTORY. 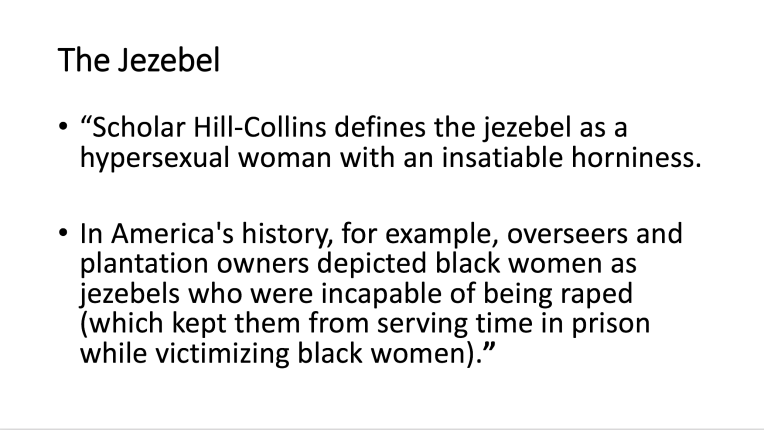 Over the next few weeks I will be exploring these concepts more and how to make it into a game that is subtle, but powerful.